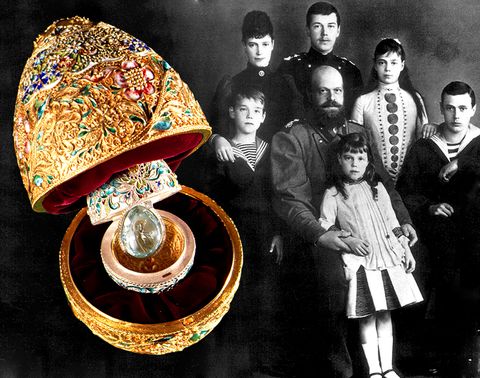 In 1885, Tsar Alexander III landed on the perfect Easter gift for his wife, Empress Maria Feodorovna: a bespoke egg commissioned from Peter Carl Faberge, a master goldsmith of the jewelry company House of Faberge. The Hen Egg was a simple white enamel egg that twisted apart to reveal a golden yolk, the yolk opened to show a golden hen, and in the hen was a diamond crown and a tiny ruby pendant. The materials were costly, but the magical surprise was priceless.

The empress was so delighted that the tsar gave a royal order to the House of Faberge and from that year forward the opulent eggs were made for the Russian court every Easter.

His son, Nicholas II, continued the tradition, giving one egg to his mother and one to his wife Alexandra every year, each more elaborate than the last.

The Faberge eggs are world renowned today, synonymous the Romanovs’ lavish lifestyle, but at the time hardly anyone outside the royal court knew they existed. During the Bolshevik’s February Revolution, the eggs were taken from the palace, and carefully packed and stashed at the Kremlin in Moscow.

The Russian government later sold many of them when it ran low on funds. Although there are believed to be close to 70 eggs created, today only 46 imperial eggs and 11 other eggs are known to survive.